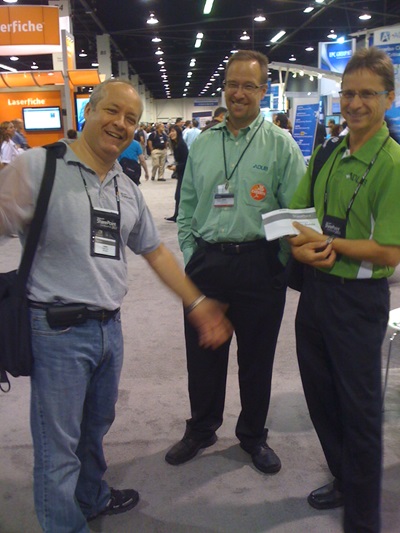 Sure, we folks at Adlib are working hard at Microsoft SharePoint Conference 2011 in Anaheim, CA this week (there are 7 of us, including our president Peter Duff and chief software architect Jean Ouellette, shown here with Gabor Fari, Director, Microsoft Life Sciences Solutions (he's on the left).

But we're also having a lot of fun, and witnessing even more fun around us at this packed show. For me it all started the first morning of the show while I was doing email in my hotel room; a rowdy group of cheerleaders, musicians and flag-wavers – in blue and silver – bopped past playing “Celebration” as they promoted the company, Huddle. It’s my early introduction to the marketing bonanza that is Microsoft SharePoint Conference 2011 (SPC11)! Just some of the cool stuff I’ve witnessed so far:

Quest Software is running a fun game called Bonk – described as a cross between Jeopardy and the Three Stooges. AvePoint is giving away a Ducatti motorcycle, K2 is giving away a Segway, and BAInsight and a few other booths are running a game with keys that attendees get to open treasure chests.

Mark Miller, Chief Evangelist at Global360 and co-founder of Nothing But SharePoint, is hanging out in the fpweb.net booth across from us and using their upper lounge area to do some of his writing in a quiet spot. He's famous for his eccentric hat and wandering around doing impromptu interviews - see him in action here.

There are some great t-shirts walking around the show floor – such as this shirt about SharePint (right), the social event started by Owen Allen, formerly of Microsoft.

Last night Neudesic hosted a night out at Disneyland and tonight is an “OctoberFiesta” party hosted by quite a few vendors, including our partner K2, and there is another event happening at Disneyland... Whew! It should take us a while to recover from SPC11!