Everything on your Apple is a PDF

Did you know that pretty much everything you look at on your Apple computer is a PDF? The Windows, the documents, the little clock on the top right-hand corner…

With the exception of video, everything is a variant of PDF.  This is great news for desktop publishing and page layout designers, since what you see is truly what you get … but how did that happen?  How does it wor 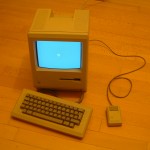 In 1985, Steve Jobs was replaced by Jean-Louis Gassée, opening the door for Steve to leave Apple and start a revolutionary new computer company known as NeXT. In addition to creating some cutting edge machines and a revolutionary operating system, the folks at NeXT also created a revolutionary display system: Display Post Script (DPS).

Developed closely with Adobe, NeXT devised a method to incorporate everything you see on the screen as instructions which very closely resemble PostScript, Display Post Script. A special chip in the computer handles converting the PostScript information into what you see on the screen. (The chip was also responsible for digitizing audio, and enabled the computer to record sounds and play back sounds without impacting the main processor, but that’s a different story.)

This new display system enabled a common language for the display as well as printers, implementing the very best in WYSIWG (What You See is What You Get) for publishers, and a real challenge for most. The NeXT computer was considered overpriced and had limited commercial success; however, the impact of the innovation can still be seen today.

Fast-forward to 1996: Apple was on the brink of bankruptcy and in desperate need for change. Then-CEO Gil Amelio decided to purchase NeXT for their operating system, and hired Steve Jobs as an advisor.

In the hands of Apple and with Steve Jobs quickly becoming CEO, NeXTStep was quickly converted into Mac OS X, and the DPS system was migrated to a DPDF system, replacing the older, more complicated PostScript with the lighter-weight PDF.

The original implementation of DPS required that NeXT pay significant royalties to Adobe, but PDF had no such licensing, and the similar characteristics of PDF and PostScript made it a simple decision.

So don’t ever underestimate the power of PDF, or the importance of the technology that creates it. It’s everywhere – especially if you’re using an Apple computer!